From 1972 until the Millennium change, some albums appeared under Johnny Mars’ name. It all started with “Blues From Mars”. Among others followed “Mighty Mars” (1980) and “Life On Mars” (1984). His fame gave him the opportunity to perform on the program “Ohne Filter” and to play with Larry Carlton.

Johnny Mars and his band were the cover kings of the festival.

The scheduled half-hour stage conversion was perfectly maintained so that Johnny Mars & Co. could start their performance punctually at 21:30. With a turbulent career behind him, the American trumpeted with many foreign compositions, thus fuelling the enthusiasm of the audience.

Of course, a classic like “Sweet Home Chicago” was made for a gig opener. The spectators celebrated from the beginning and over “Kansas City” the journey continued to one of the highlights of the performance. “Help Me”, another song well known to blues fans, was served with a cool groove and this piece turned out to be a damn long cry for help, in which the frontman of course also used his harp. Whether singing or playing with a small instrument, Johnny Mars had those present on his side.

The enthusiasm was also in motion. For example, in “Rock Me Baby,” in which the keyboarder Diederik Ijidema shone on the black and white keys. At such a gig a musical bow to John Lee Hooker was not missing. The final “Crossroads” made it clear what class the individual musicians had in the band of Johnny Mars. Thus, the well-known songs were personally shaped and everyone could show their skills in solos. 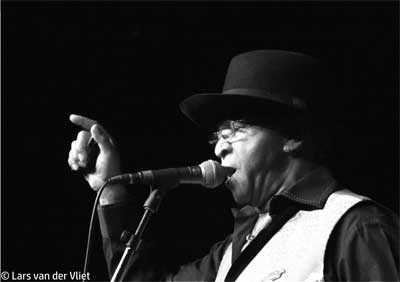